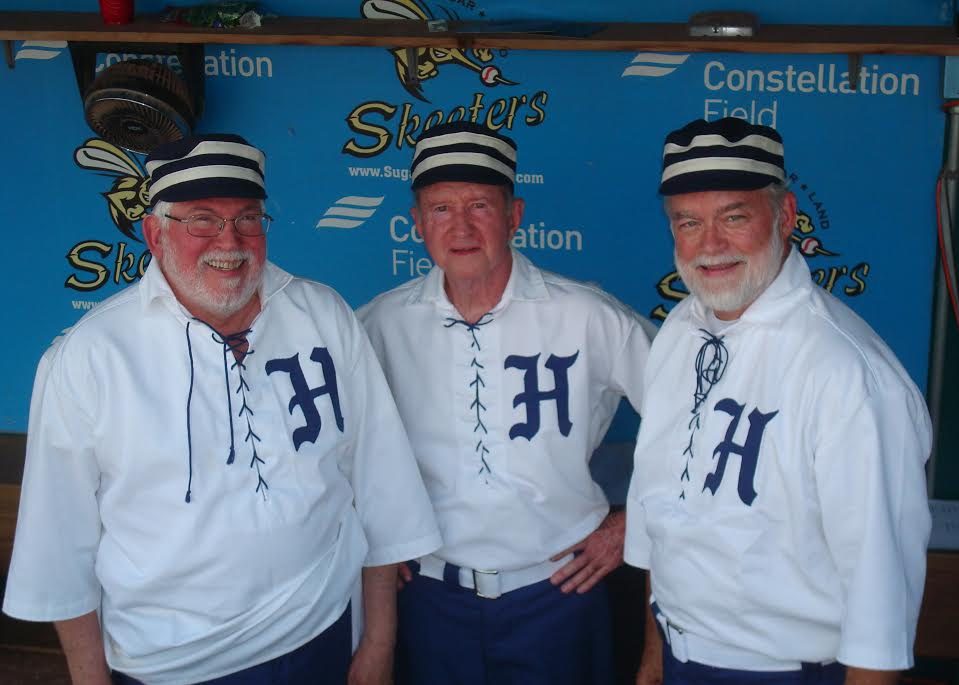 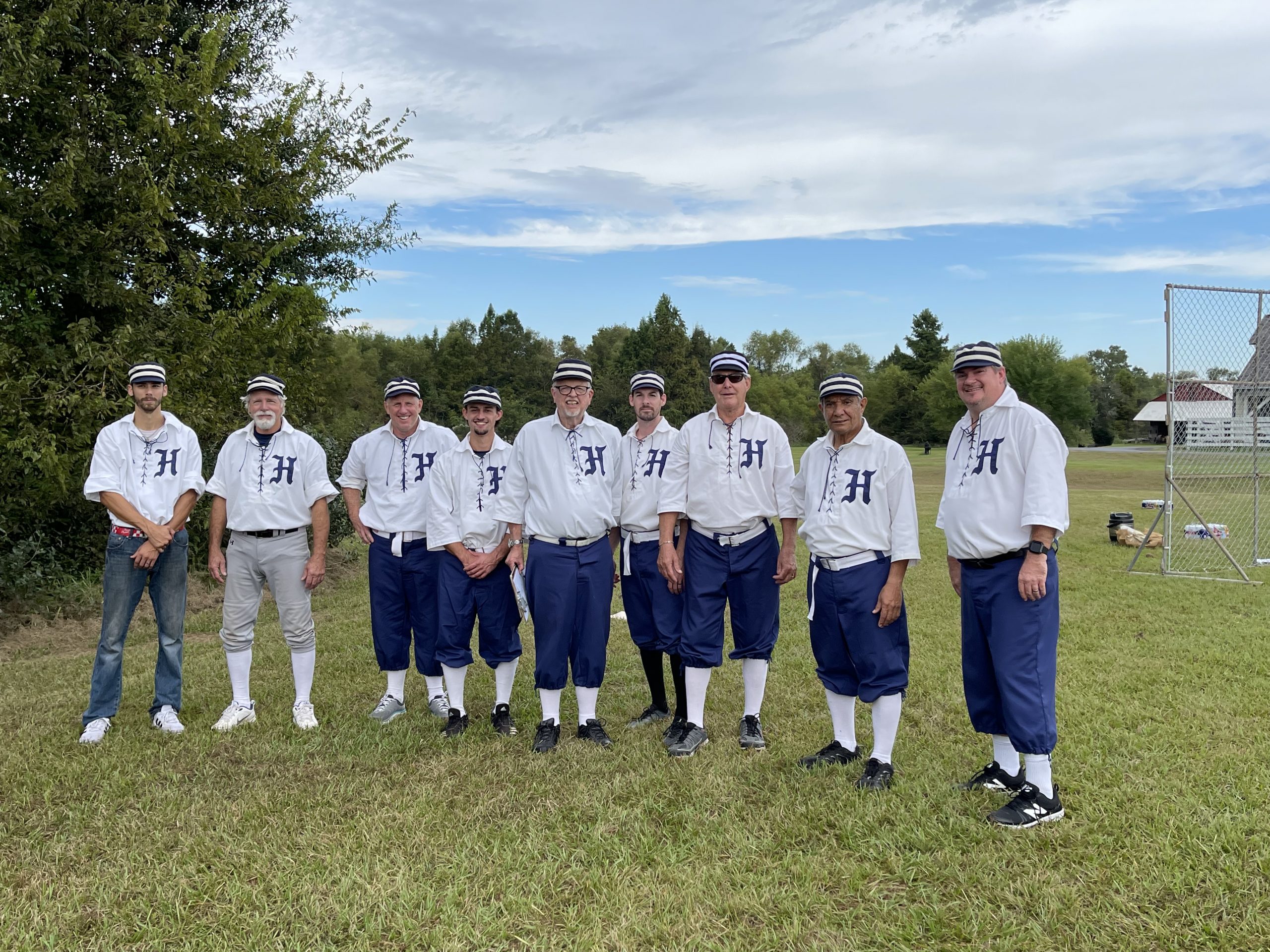 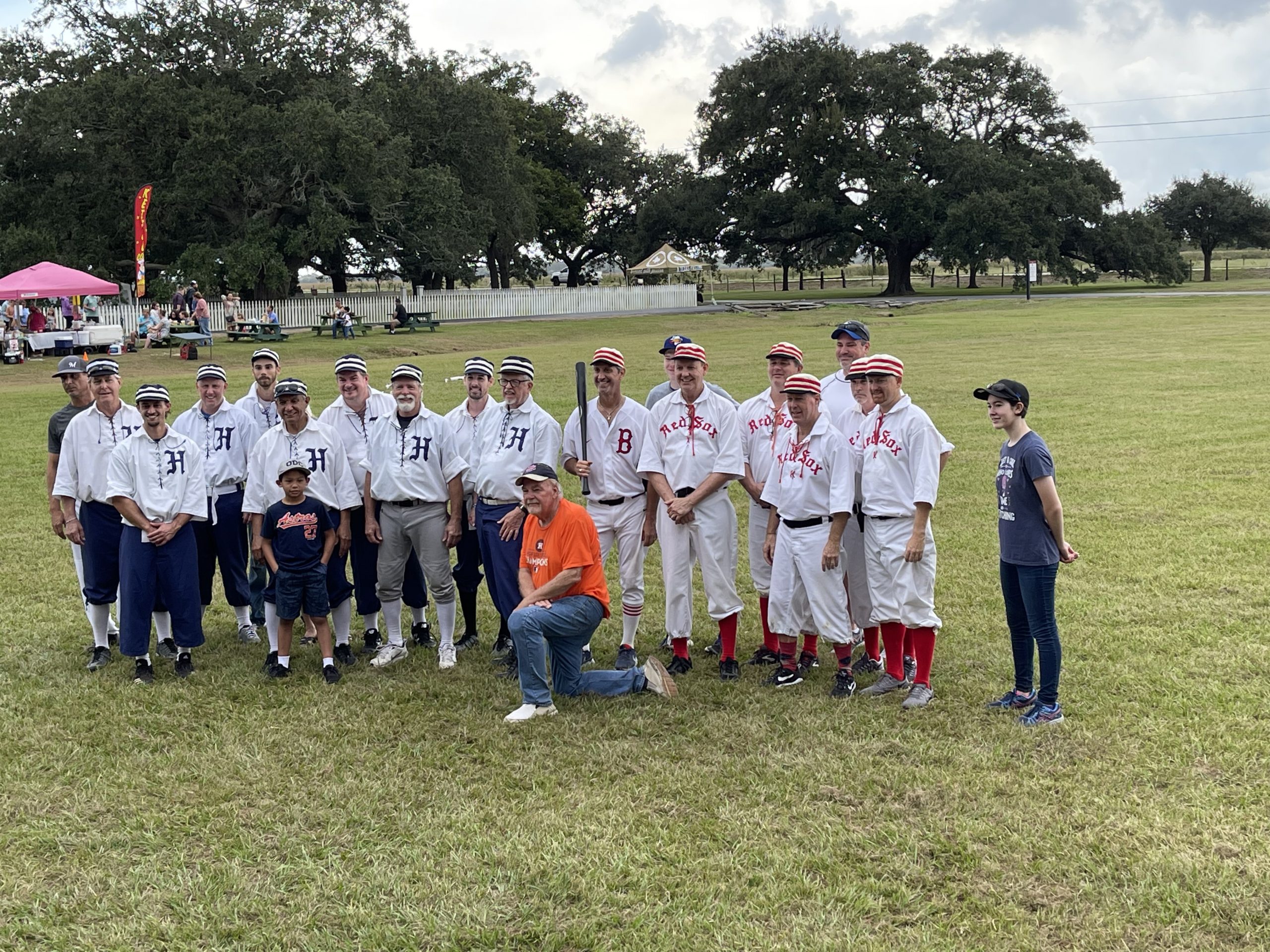 The Babies and Red Sox pose for a team picture at the end of the contest. Photo courtesy of Susan Thompson 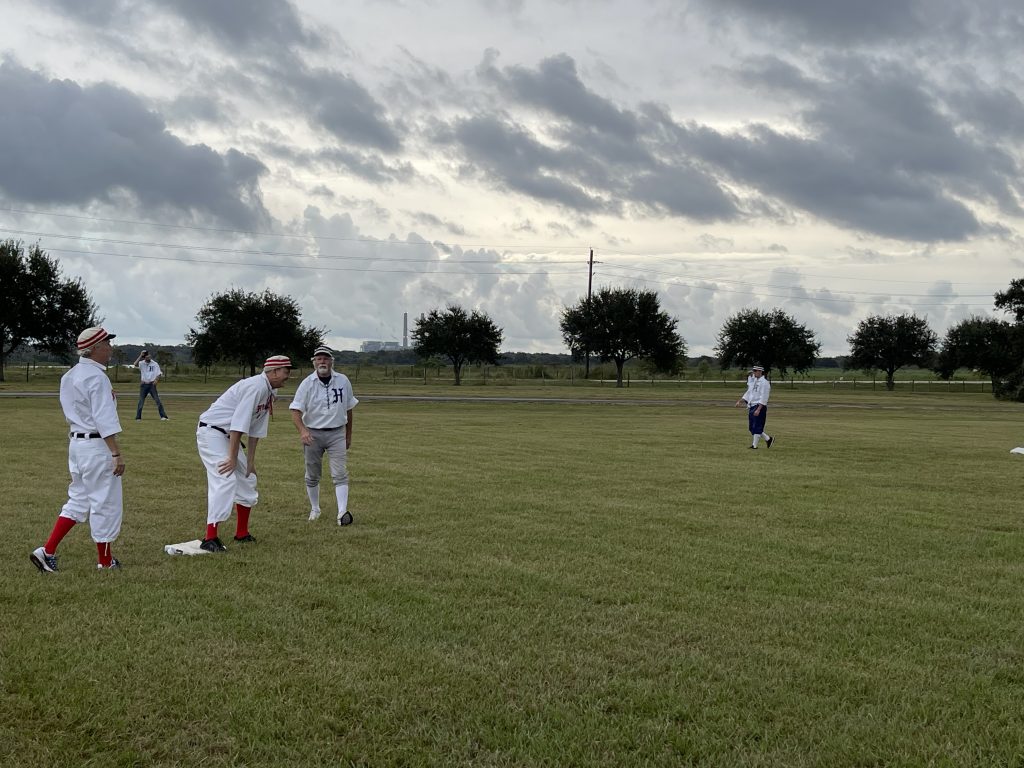 Members from the Barker Red Sox and Houston Babies exchange pleasantries in between pitches. Photo courtesy of Susan Thompson

As part of the annual Texian Festival at the historic George Ranch, two Vintage Base Ball teams met on the grounds of the historic ranch to play ball the way it was played in the 1860’s; the Barker Red Sox, managed by Bob Copus, and the Houston Babies, captained by Bob Dorrill.

After a rousing rendition of the National Anthem led by Mike McCroskey it was time for the Blind Tom to yell “Play Ball”.It was a lively game witnessed by scores of cranks (fans) who sat on specially placed bleachers and lawn chairs. Behind the bleachers was a stage set for the singing group The Tanners as well as tents where the singers camped out. Down the left field line was a new addition to the festivities, a beer tent where players and cranks could quench their thirst if they so desired.

It was an exciting game, with the Babies rallying late to an 8-7 victory. After the game, group and team photos were taken by family members and cranks that enjoyed the game, followed by a bag lunch provided by the George Ranch.  Also, players were asked to be in pictures taken by attendees of the festival. As Red Sox players walked around and enjoyed other events at the festival, they were met with “go astros”, “better luck next year”, and an occasional “Boo”, all in fun.

It was a fun day with good sportsmanship and many laughs.

Sponsored by the Larry Dierker Chapter of the Society for American Baseball Research, the Houston Babies vintage baseball team seeks to maintain the game’s historic roots, sans million-dollar contracts, performance enhancing drugs, dry-fit apparel technology and even baseball gloves. The Babies’ roster is loosely filled with SABR and non-SABR enthusiasts and cranks of the 19th-century version of the game. The team is named in appreciative honor of the first professional base ball club in our geographic area, the 1888 Houston Babies.

• A gentleman’s game. No swearing, scratching, chewing, or spitting.

• Players do not wear gloves.

• No sliding, leading off bases, or stealing bases.

• The “striker (batter)” may not run over first base.

• A batted ball is determined fair or foul by where it hits the ground.

• A striker is out when a batted ball is caught on one bound off the ground, fair or foul or on the fly.

• Foul tips are not strikes.

• Players crossing home plate must then proceed to the tallykeeper’s table, place one hand on the table, raise the other hand and ask the tallykeeper to please tally his “ace (score or run)” for the team. He is then instructed to strike the tally bell and only then does the ace count.

• In “hurling (pitching),” the ball must be hurled underhanded.

• The umpire does not call balls but may call strikes if deemed necessary.

• The umpire can levy fines on the spot for ungentlemanly conduct.

• The Umpires may ask players and cranks for assistance in making calls.